New York Foundation for the Arts (NYFA) is a fiscal sponsor of Five Cents a Can. This project was supported by the Lower Manhattan Cultural Council's Creative Engagement Grant. Please make a tax-deductible contribution to this meaning project! 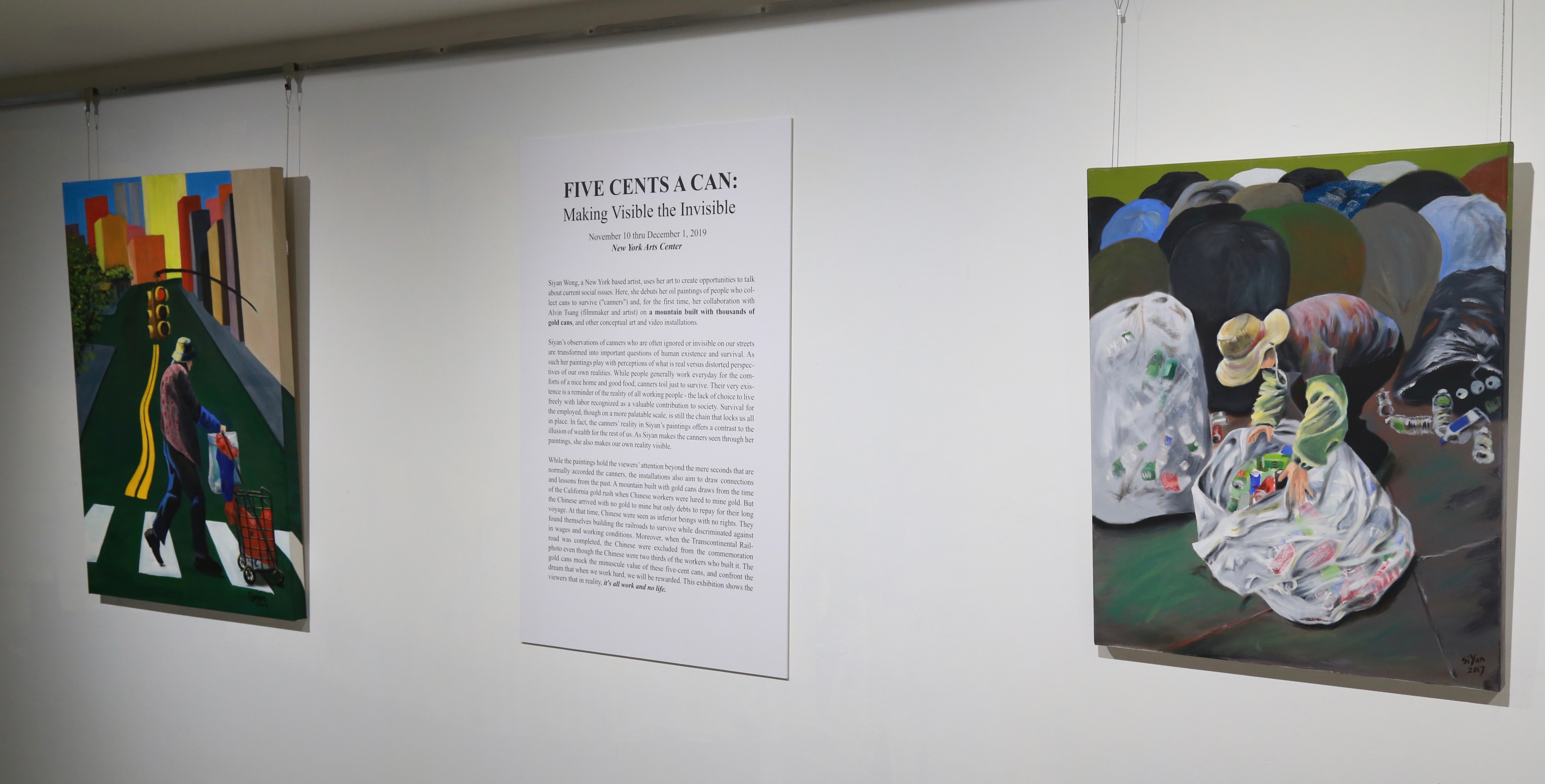 The paintings and art installations in this project aims to open up conversations about the cans and bottles redemption industry. It also specifically aims to address the plight of working people through the current experience of Chinese immigrant women in their 50s or older who found themselves without the job opportunities in the garment industry that their predecessors had when garment productions relocated to countries like Bangladesh and Vietnam. 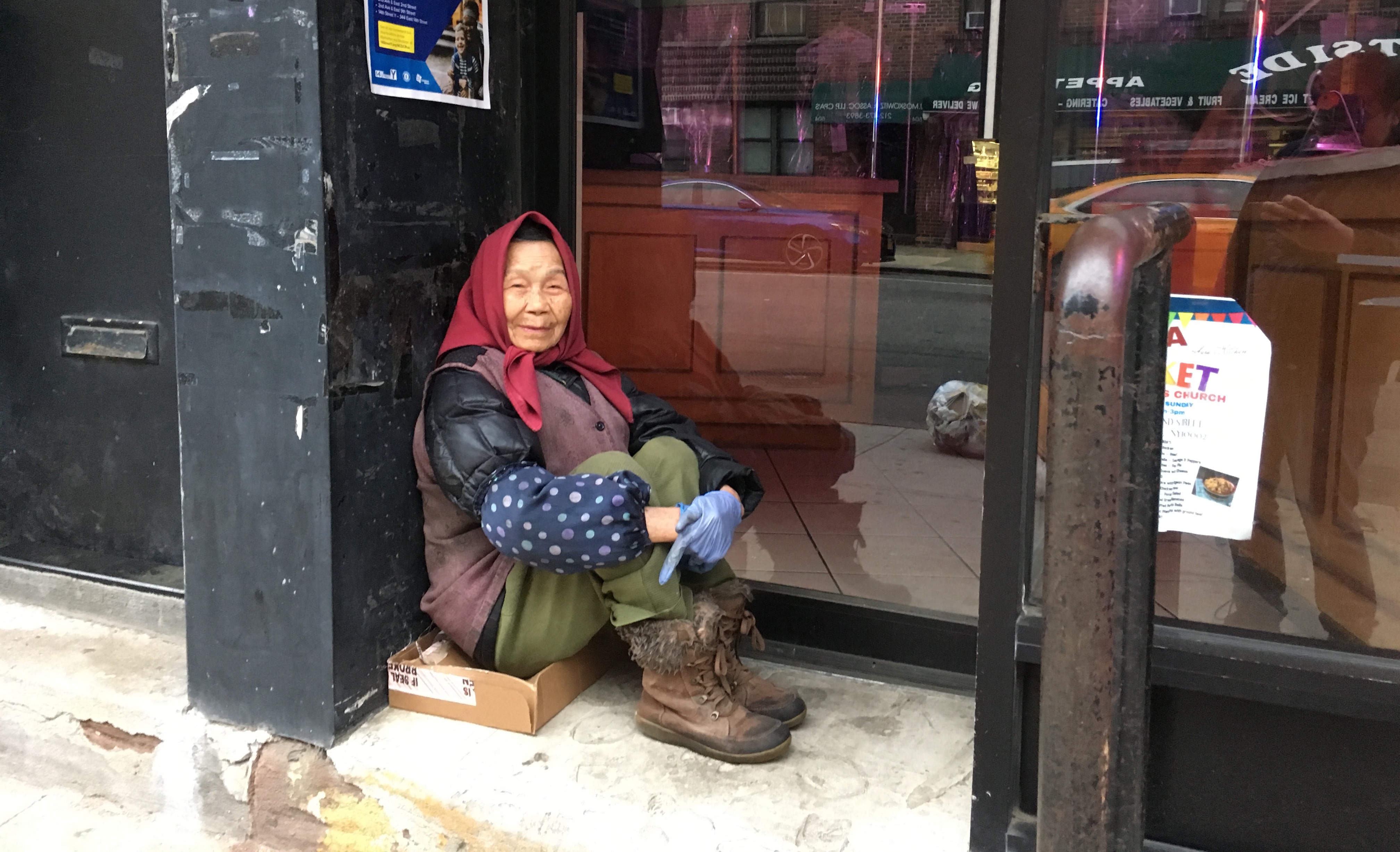 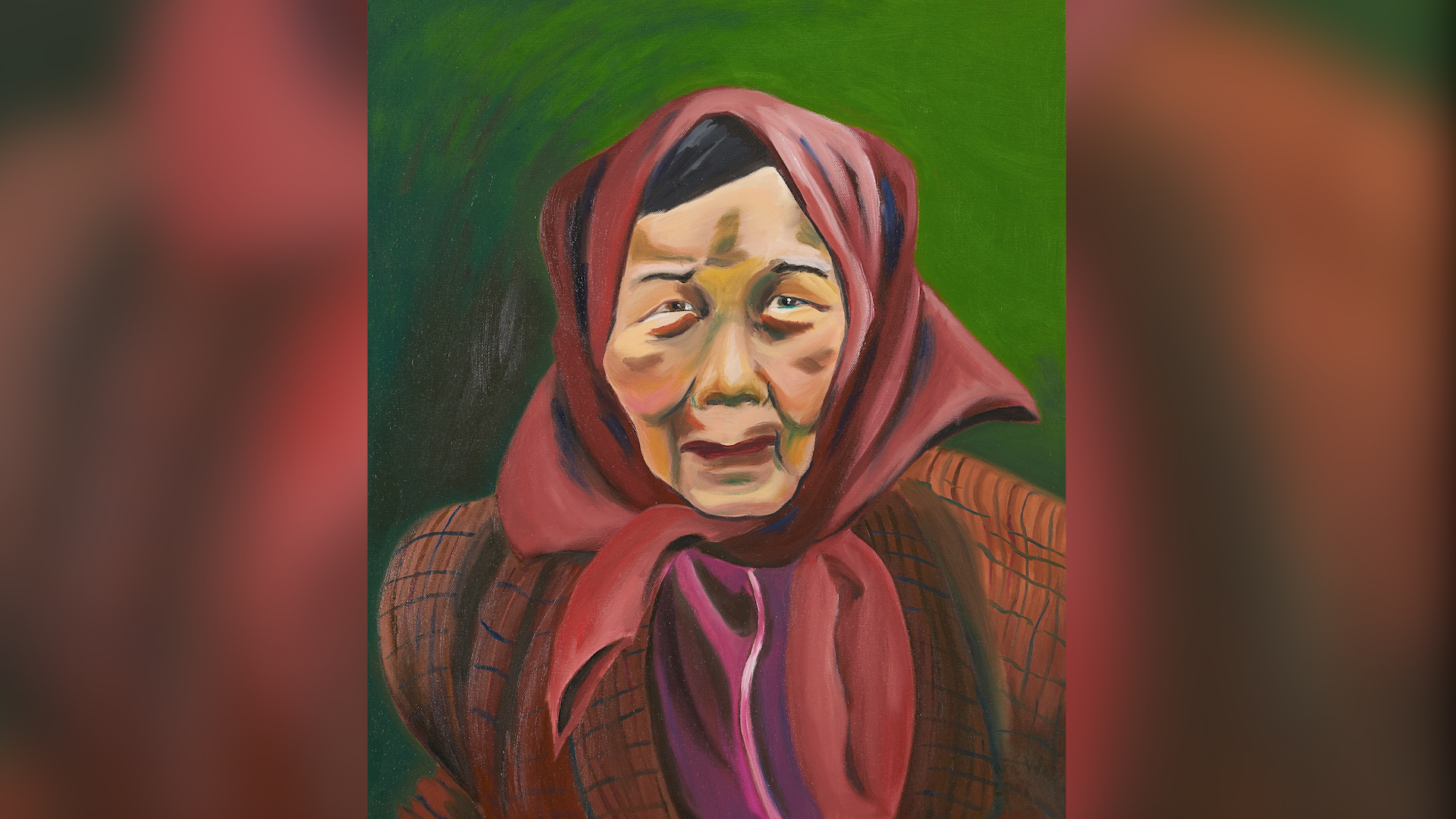 Through my oil paintings, my observations of canners who are often ignored or invisible on our streets are transformed into important questions of human existence and survival. As such my paintings play with perceptions of what is real versus distorted perspectives of our own realities. While people generally work everyday for the comforts of a nice home and good food, canners toil just to survive. Their very existence shows the reality facing all working people - their work can vanish and their livelihood gone because working people are only numbers on a profit and loss spreadsheet that knows no humanity. Many canners were once garment factory workers who earned a regular income. Survival for the employed is actually the chain that locks us all in place. In fact, the canners’ reality in my paintings offers a contrast to the illusion of wealth for the rest of us. As I make the canners seen through my paintings, I also make our own reality visible. 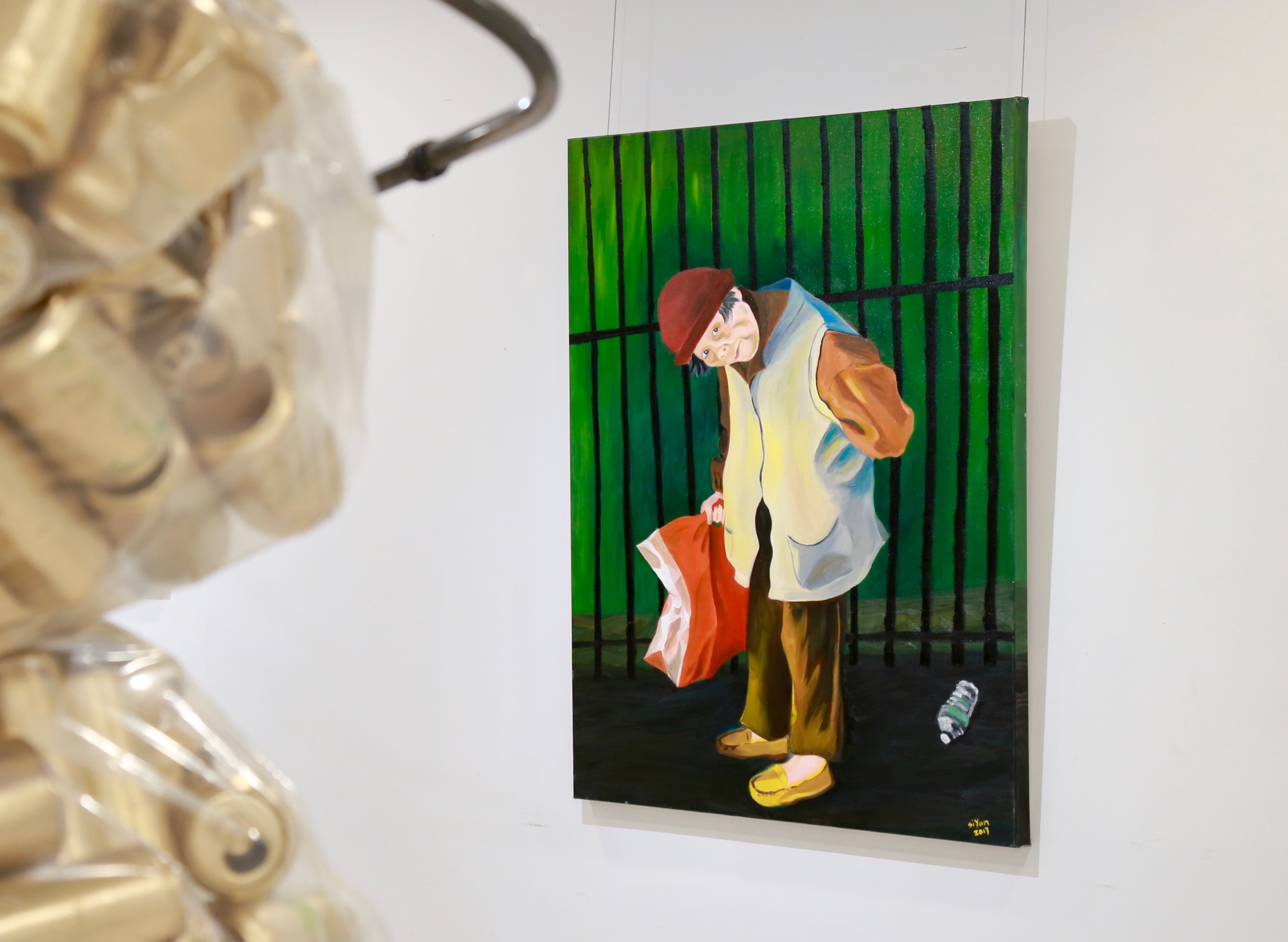 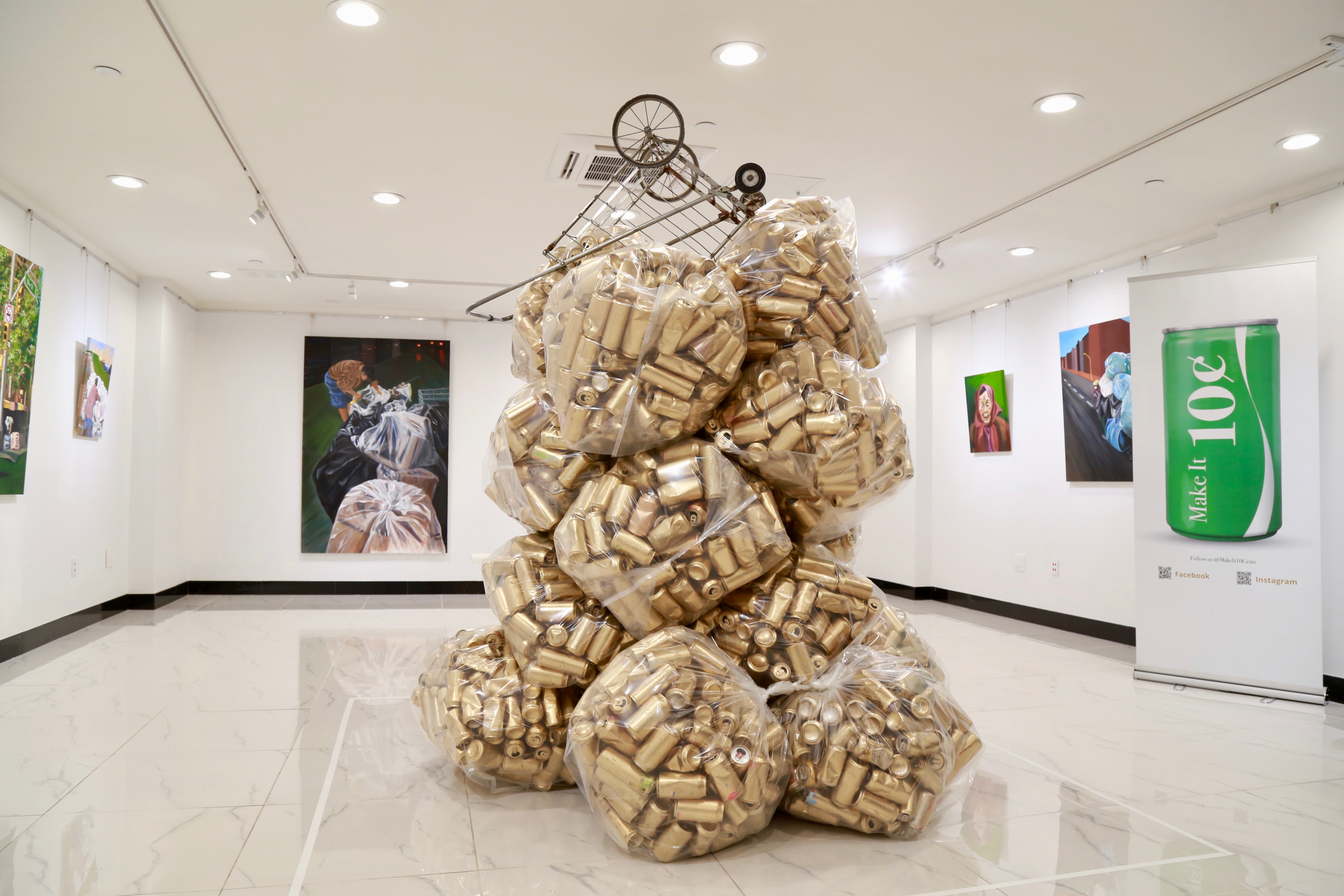 While my paintings hold the viewers’ attention beyond the mere seconds that are normally accorded the canners, the visual installations draw connections and lessons from the past. For example, a mountain built with gold cans draws from the time of the California gold rush when Chinese workers were lured to mine gold. But the Chinese arrived with no gold to mine but only debts to repay for their long voyage. At that time, Chinese were seen as inferior beings with no rights. They found themselves building the railroads to survive while discriminated against in wages and working conditions. 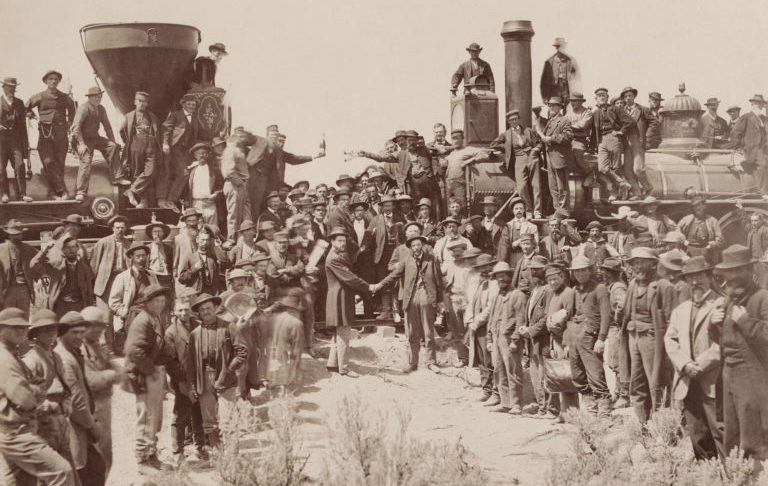 Moreover, when the Transcontinental Railroad was completed, the Chinese were excluded from the commemoration photo even though the Chinese were two thirds of the workers who built it. The gold cans mock the minuscule value of these five-cent cans, and confront the dream that when we work hard, we will be rewarded. This Exhibition explores a recent community experience to raise many questions, among them: What is the value of work? How do we protect communities and the people? 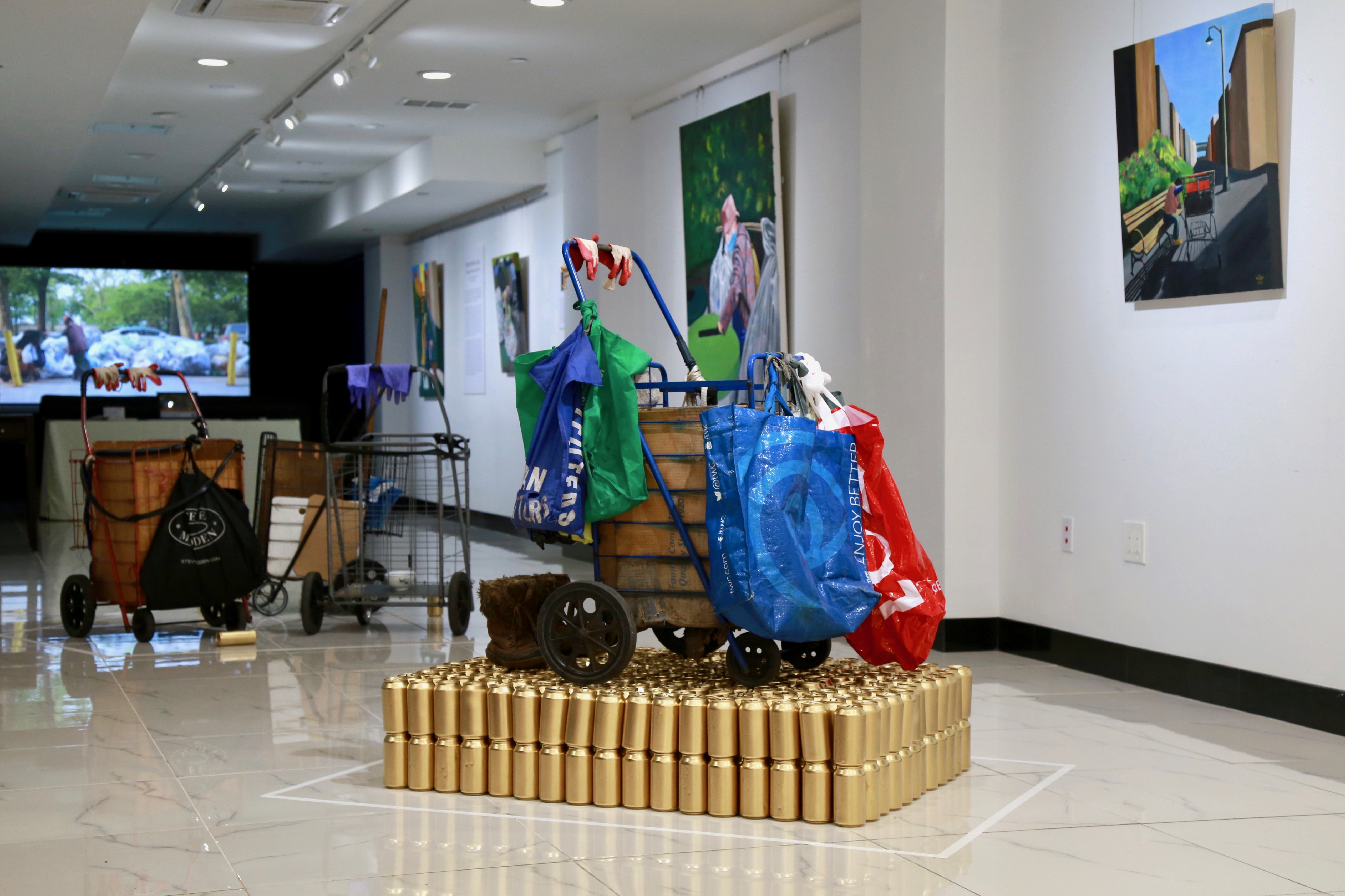 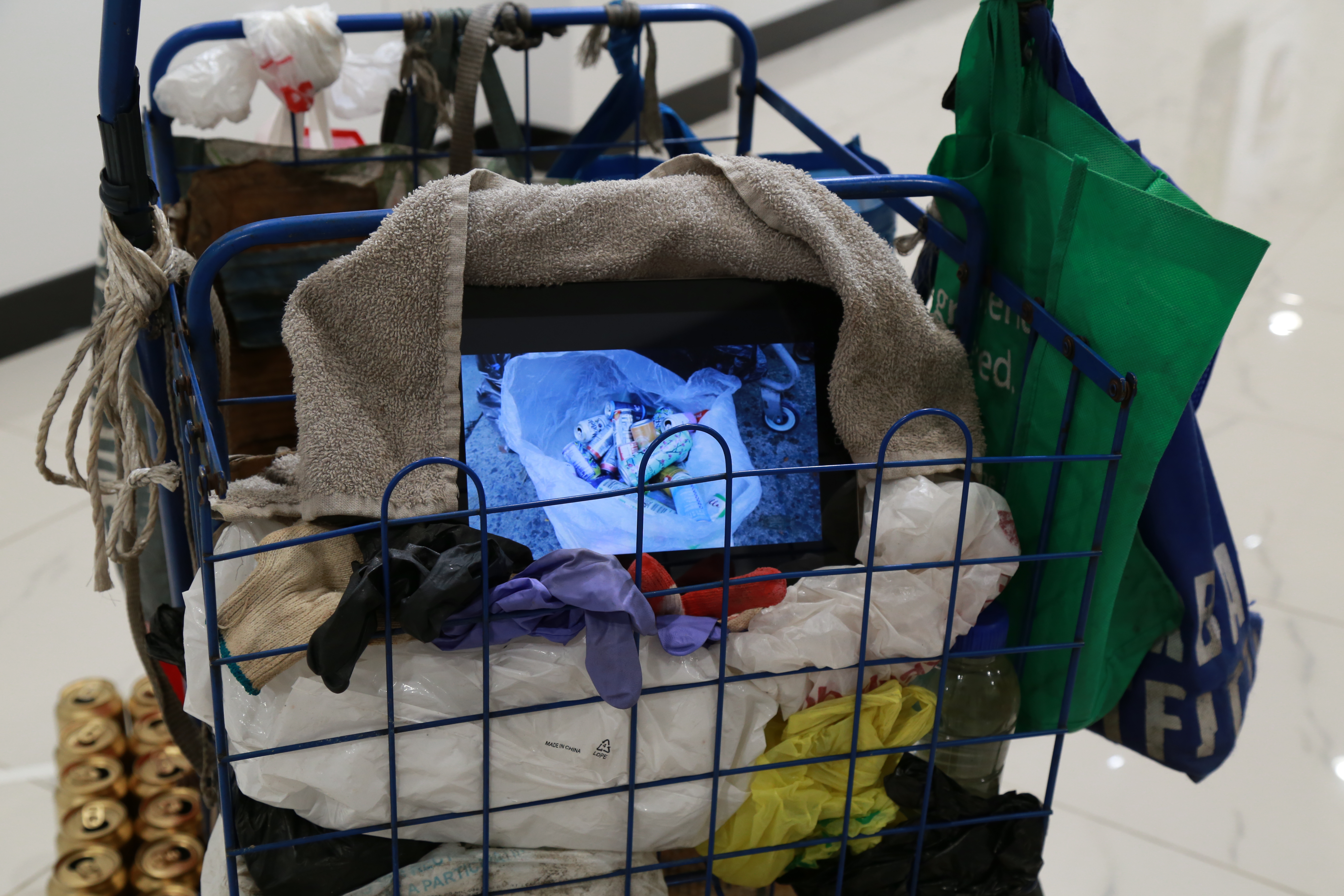 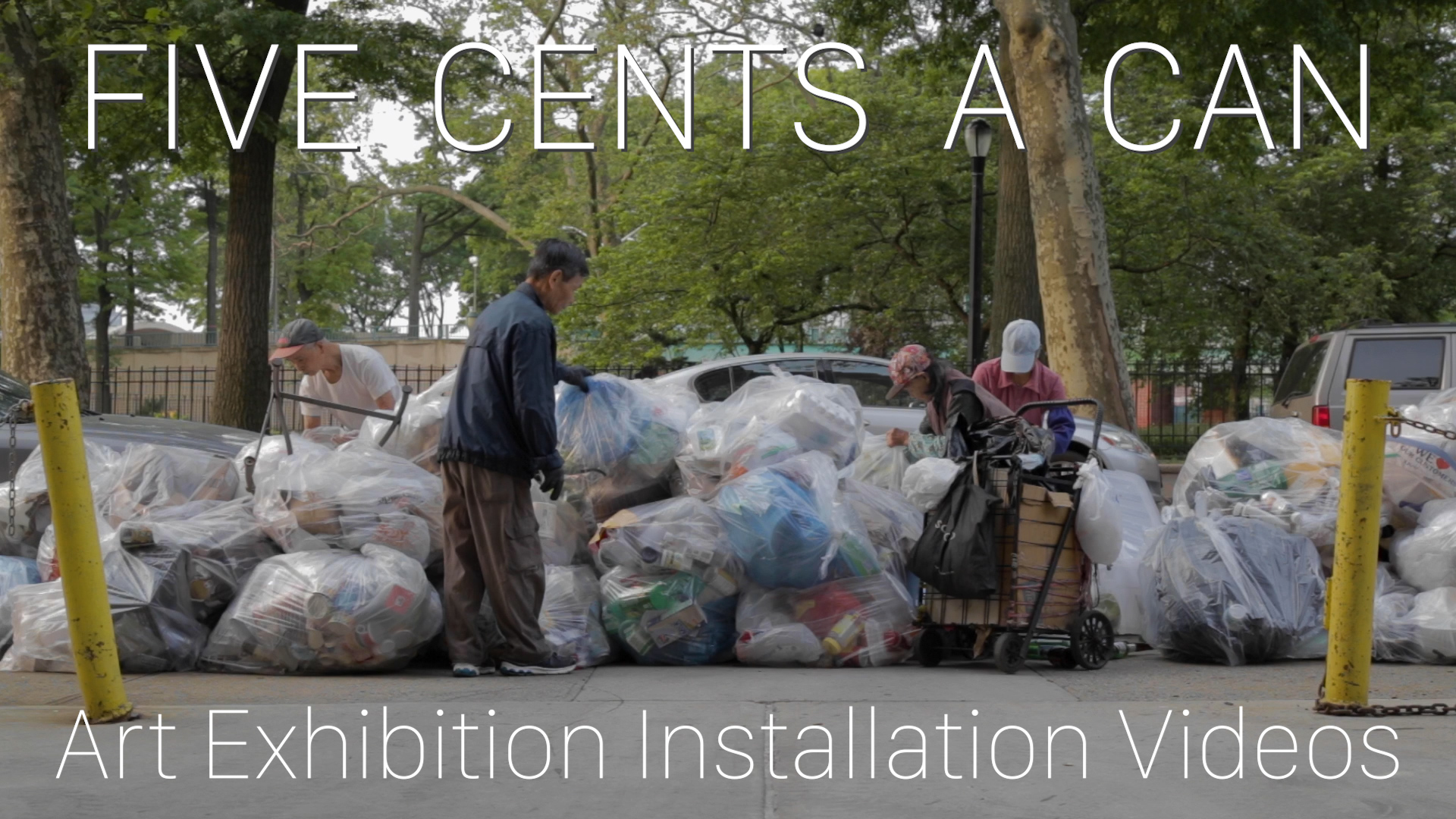 Through oil paintings and a collaborated short documentary film with filmmaker Alvin Tsang about the elderly and low wage workers who must survive by collecting cans, I hope to start conversations about the system that marginalize them and inspire change. I hope to tour this exhibition in cultural institutions in NYC and other major U.S. cities. 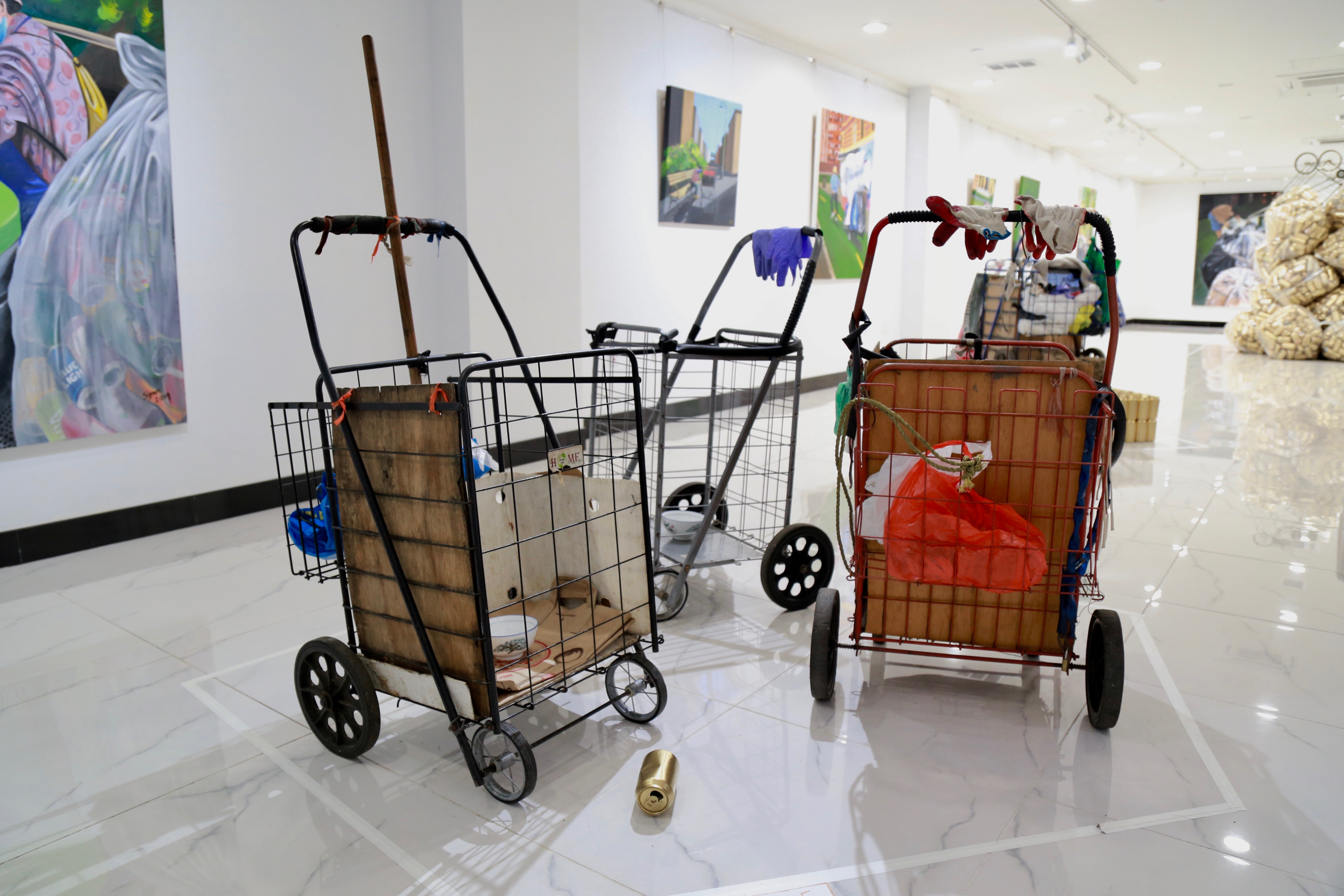 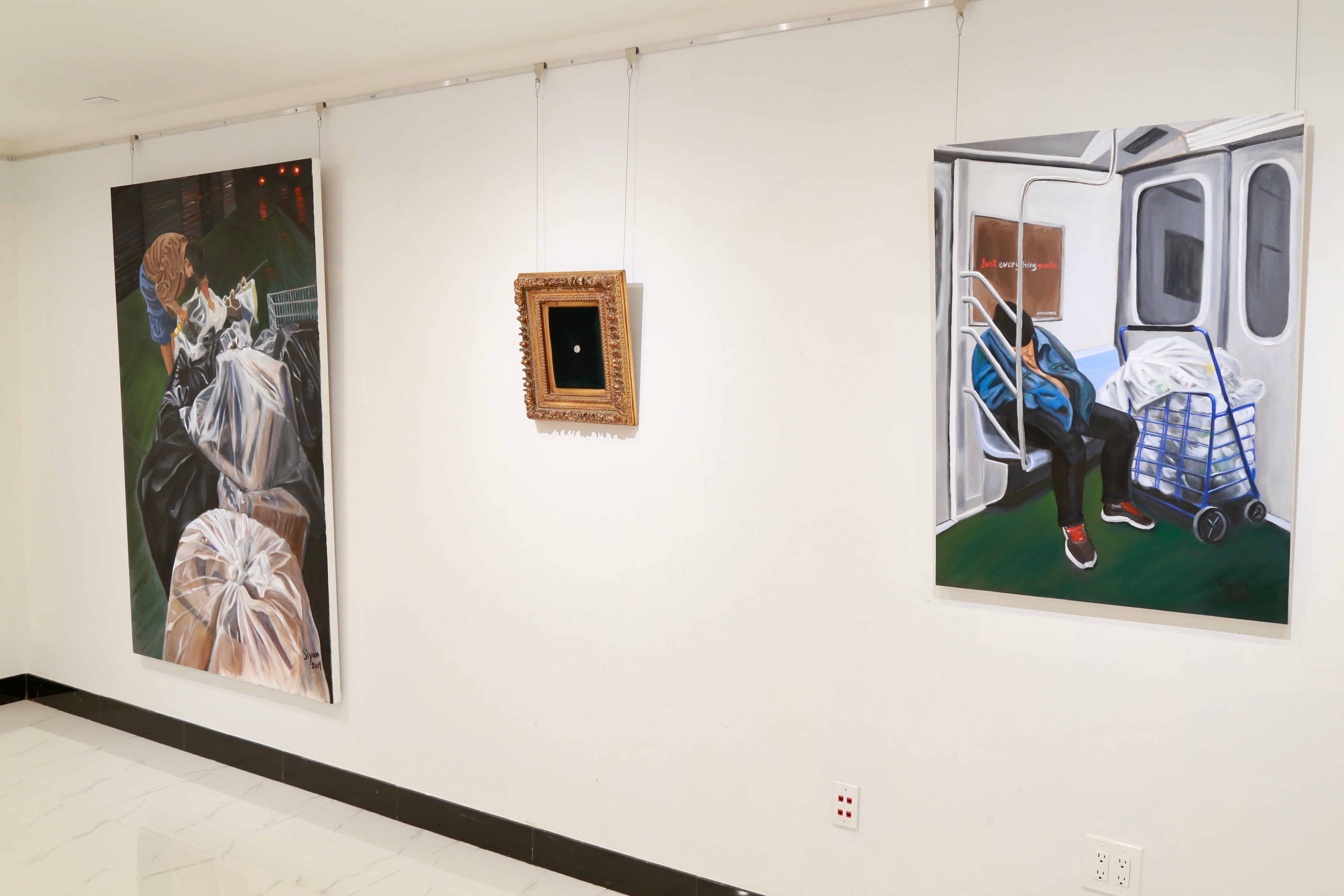 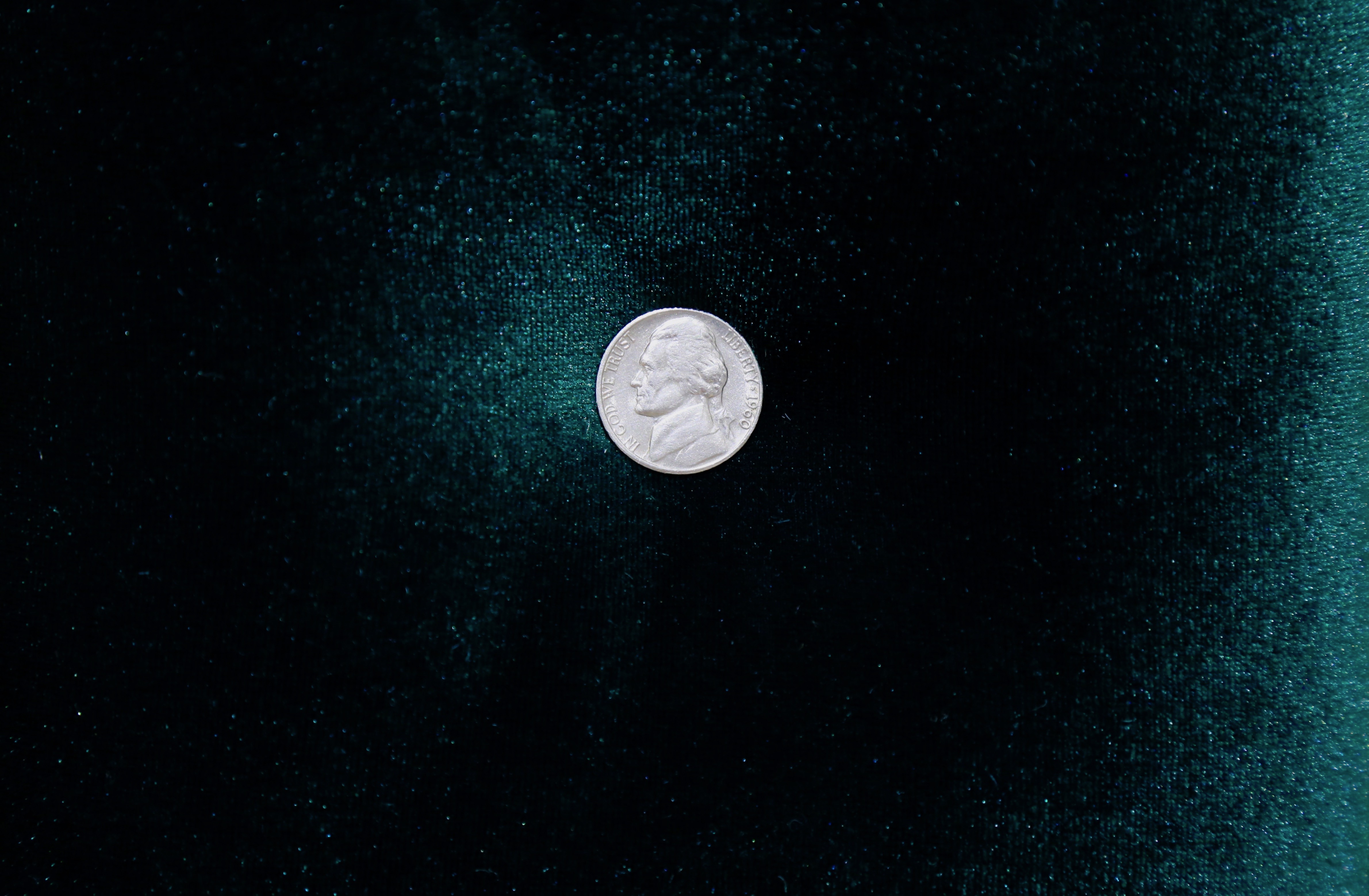 We are looking to continue exhibiting Five Cents a Can: Making Visible the Invisible in NYC, and to tour this exhibition to several major cities in 2021 and 2022!